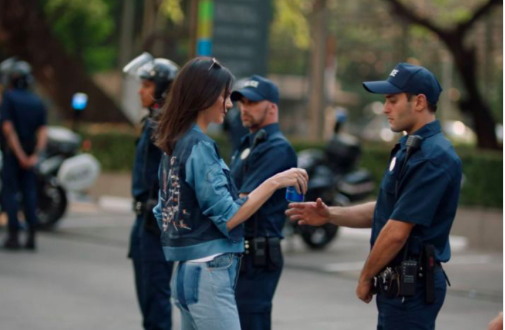 It’s was a regular Tuesday evening. I came home late from work and started to prepare my readings for class when I decided that I wanted to take a mini-break before burning the midnight oil. I came across a Pepsi ad that seemed to be getting a lot of traction and even featured a Kardashian-Jenner (I don’t keep up with this family at all). So of course, I take a look at it and for the next 2:40, I couldn’t believe the foolery that I sat and watched. Now, there are media outlets using the words, “tone-deaf”, to describe that fantastically foolish advertisement, but my momma told me to call a “spade a spade”: That was some bullshit! Somebody actually had the heart, mind, and soul to say:

“Hey, you know what would be a good idea? Let’s have a Jenner bring peace to a country in disarray over political, sexual, and racial unrest. Yea, that’ll get them to drink more Pepsi!”

Sway, you don’t have the answers for this one, bro! You can’t save them Sway (they don’t wanna be saved)! Who in their right mind at Pepsi actually believed that playing on people’s lived traumatic experiences would encourage more people to drink their subpar cola? Better yet, who thought it would be a good idea to do any of the following:

a) Showcase the struggles and protests of marginalized groups for profit while Kendall Jenner casually takes photos across from the walk area.

b) Create this illusion that people magically came together and joined in the fight towards equity. I don’t know what media the people at Pepsi have been paying attention to, because it usually doesn’t work that way. Our country is pretty divided on a lot of issues and it isn’t always happy go lucky.

c) Contact Kendall Jenner and convince her that she should do this damn commercial? I’m not new to the game. I’m sure Pepsi figured that they would make quite a bit of money from her presence on camera.  I totally understand, but damn all of ya’ll to hell! At what point did ya’ll truly believe that it was okay to have this uber rich, privileged, YT woman be at the forefront of this so-called “movement”?

d) Have Kendall give a Pepsi to a police officer that was on protest duty? But here’s the kicker: the crowd cheers after she gives the cop the soda!

Does Pepsi understand how “tone-deaf” that seemed during this whole ordeal? Ya’ll didn’t know this, but Pepsi has the answers for this mess that we’re in with this current administration. Everyone gets a Pepsi and all things will be normal, yet that is not necessarily always true. As a collective, people of color and other marginalized groups continue to fight for their rights and I’ve been in a few protests. This is not a happy time as some people have actual consequences of their actions. What’s going to happen to a child (if present)? Will I lose my job for standing up to injustice?

These are real situations out here and I’m frustrated that our struggle is being “played for pay” as though it’s a merry time of year (definitely NOT talking about Christmas). Again, Kendall, in her best Bohemian Rhapsody clothes, jumps to the front of the line as many so-called “allies” do when it comes to fighting for justice. There are a few “social justice allies” that tend to take the focus off of the movement and centers everything on them, which defeats the purpose of their “allyship”. Pepsi, I see where you wanted to go, but you can’t get there on the backs of lived struggle. I’m drinking Chek from here on out!